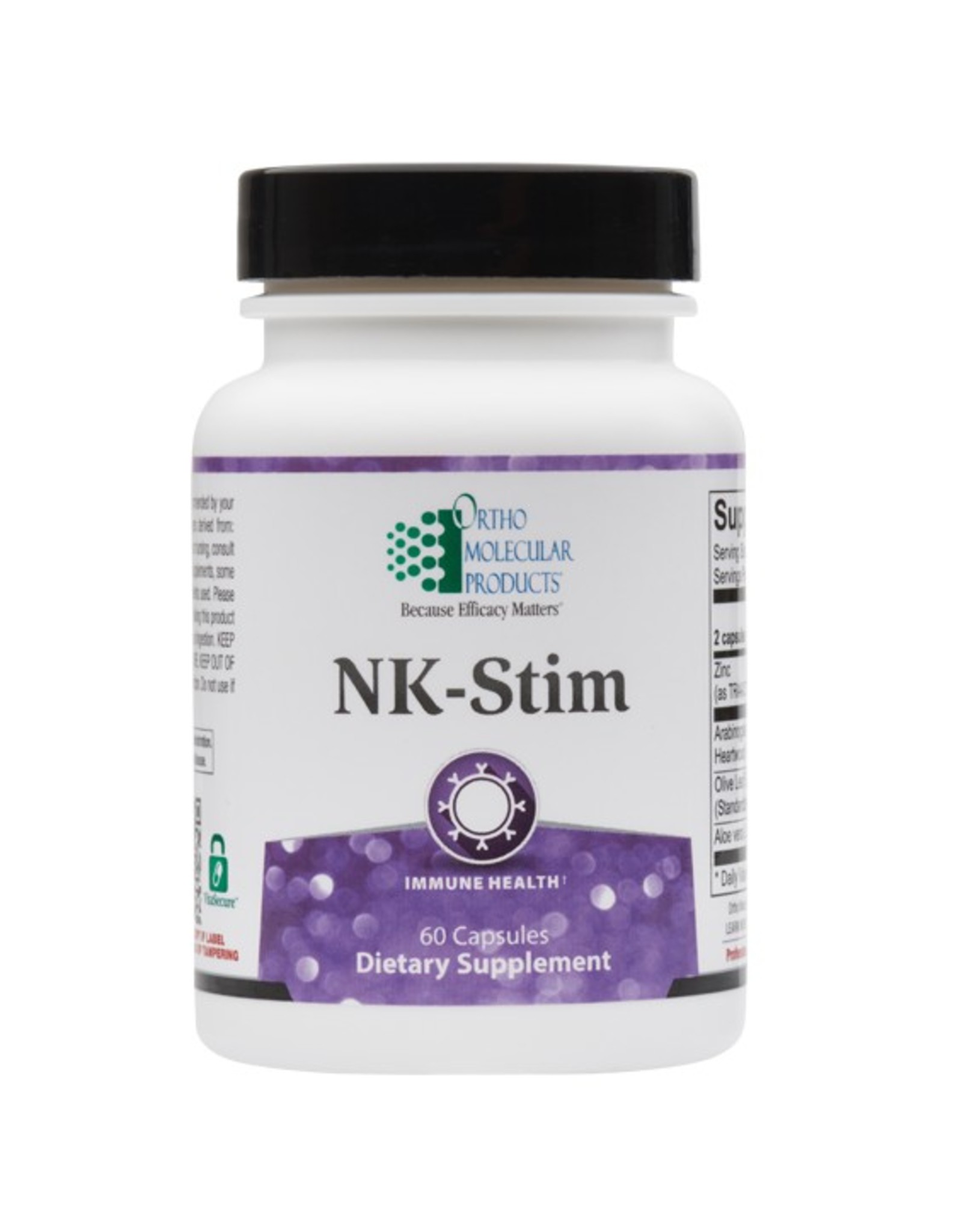 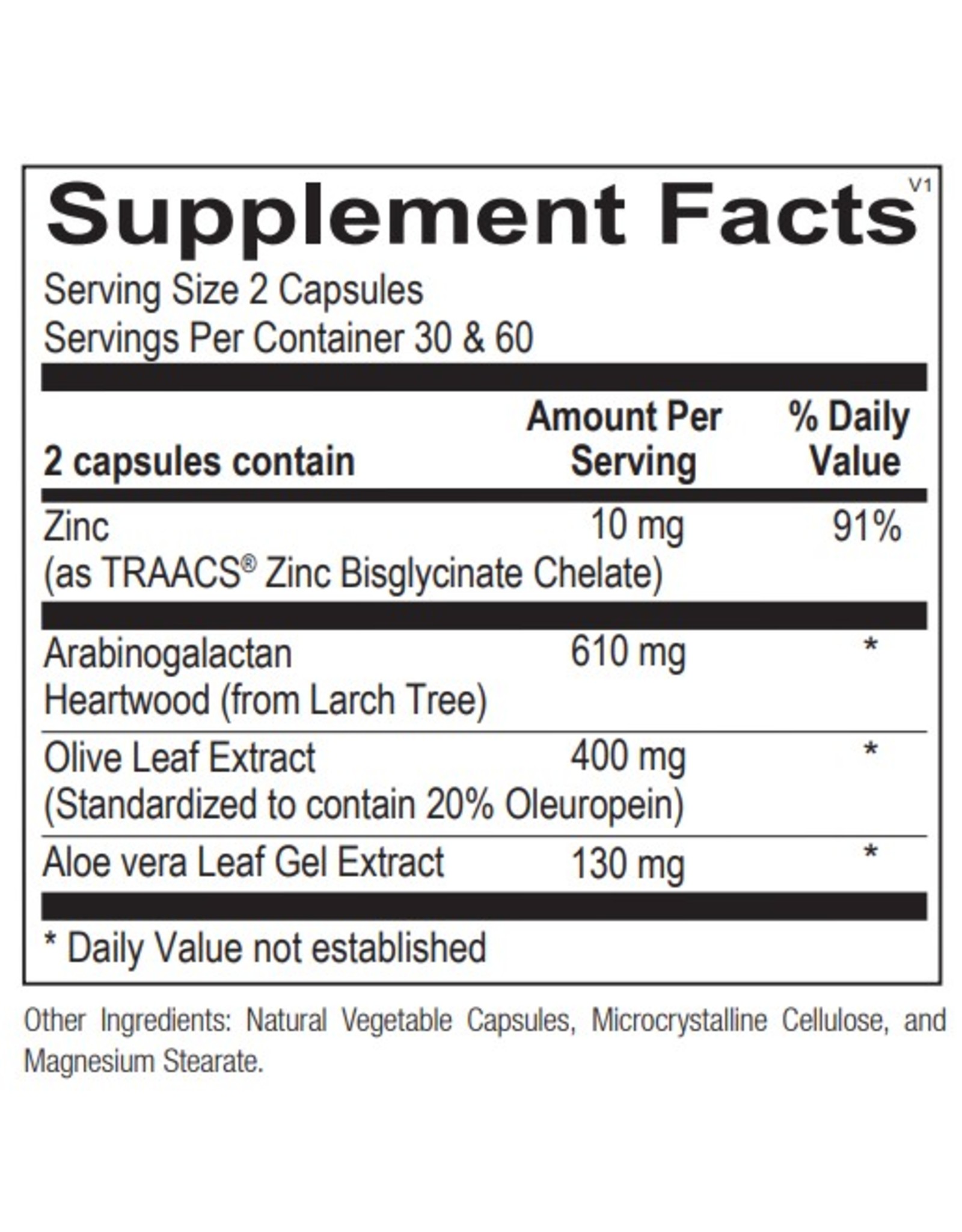 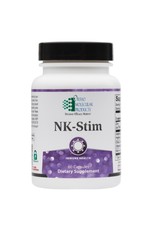 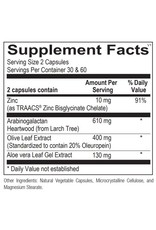 NK-Stim provides the powerful immune supporting combination of Arabinogalactan, Oleuropein (the active ingredient found in olive leaf extract), Acemannan (the immune-stimulating component of aloe vera concentrate) and chelated zinc.  Arabinogalactin has been shown to support positive immune and reticuloendothelial function*.  Arabingalactins are now being used to support a number of immune functions*.

OrthoMolecular’s potent 200:1 extract has had the aloin-like compounds removed and is not a stimulating laxative.  Aloe Vera has long been studied for its role in general immune-system support.

Suggested use: 2 capsules two times per day or as recommended by your health care professional.

Formulated to be free of allergens derived from:  Gluten, corn, yeast, artificial colors and flavors.

Warning: If you are pregnant or nursing, consult your physician before taking this product.  Keep out of the reach of children.

Zinc is known to play a central role for the proper functioning of the immune system and is a potent booster of host resistance. Zinc affects multiple aspects of immune response from maintaining the integrity of the physical barriers (skin and mucosal barriers) to activating genes within lymphocytes. Zinc is also crucial for the normal development of a multitude of immune cells, including neutrophils, NK cells, T lymphocytes, B lymphocytes and improving IgG antibody response. As a key trace mineral required for immune activity and development, supplementation with zinc for a period of one to two months has been shown to stimulate a stronger immune response.

Aloe vera is a member of the lily family that has been used topically and orally as a traditional remedy for thousands of years. The active ingredient in aloe, acemannan, is a complex carbohydrate that has been found to be the component responsible for the immune boosting properties of Aloe vera. Acemannan has been shown to stimulate a multitude of key components of the immune system including macrophage cytokine activity, nitric oxide release, surface molecule expression, and cell morphologic changes, all of which produce a sharper, highly effective immune response. The Aloe vera used in NK-Stim has had the aloin-like compounds removed. This eliminates the possibility of producing the laxative effect that is normally observed following ingestion of Aloe vera concentrate.

Oleuropein is the unique polyphenol molecule in olive leaf extract, which has a number of health promoting benefits. The olive tree (Olea europaea) produces oleuropein abundantly in its leaves, as well as in the olive fruit itself. Special processing techniques now allow for the extraction of a stable, standardized form of oleuropein. Oleuropein is a potent antioxidant and promotes inflammatory balance. Studies have indicated that oleuropein boosts host immune defense and supports a strong immune response during seasonal and respiratory challenges. It is especially helpful for those with immune challenges related to an imbalance of bacteria in the intestines.